The Fungi from Yuggoth, by H.P. Lovecraft. Sixth Reading, parts 15-18. We gain some ground 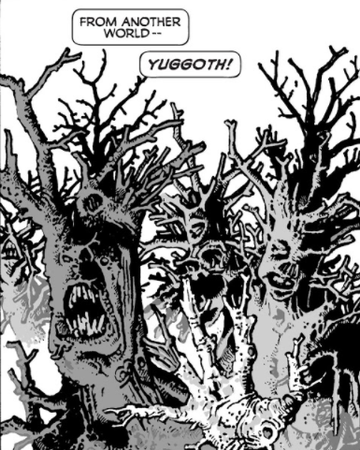 The Fungi from Yuggoth is a sonnet sequence by supernatural horror writer H.P. Lovecraft that constitute a continuous first-person narrative. It concerns a person who obtains an ancient book of esoteric knowledge that allows one to travel to other planets and strange parts of the universe. The title is a term for the Mi-Go, an alien race the narrator encounters, which are fungoid beings resembling crustaceans which hail from the planet Yuggoth, to which the narrator has unwittingly traveled.

XV. Antarktos
A 'great bird' tells the narrator of a mountain in a polar region that might hold an untold city buried underneath.

XVI. The Window
The narrator entered a house which, in a back room, had a stone-sealed window which he recognized he looked into in his dreams, and he removed the seal to find untold worlds beyond it.

XVII. A Memory
The narrator found an expansive land of steppes and rocky table-lands inhabited by alien beings, and was met by someone who referred to him by name who would tell him where he was: the man he encountered before had brought him home.

Previous Posts in this Series